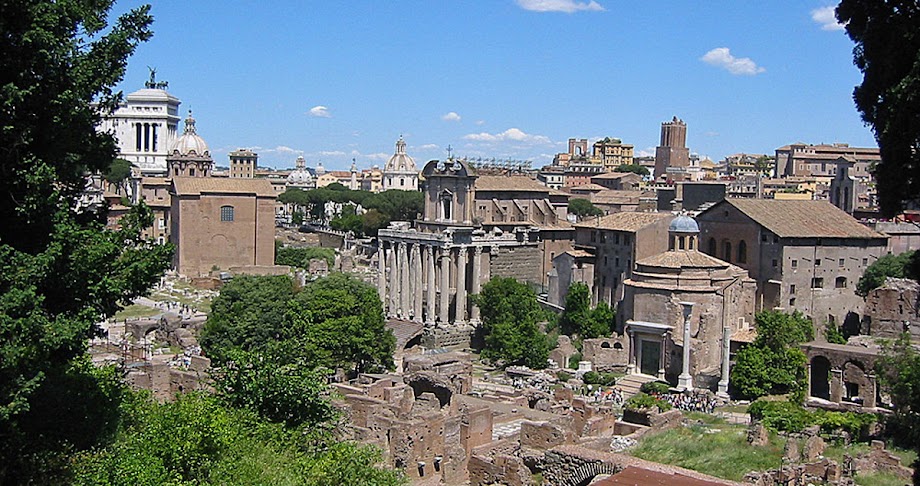 Bloggo Sud de la France-o 12: The Long Journey from the South of France to Frankfurt and my Flight Home

I suppose I could call the first part of this post my "long day's journey (from France) into night (in Germany). There's a theatrical reference in there, for people who like such stuff, but suffice to say that after a never-ending comedy of errors - whoops! another - I finally arrived in Frankfurt.

The day began at the rather fancy TGV station outside Avignon. 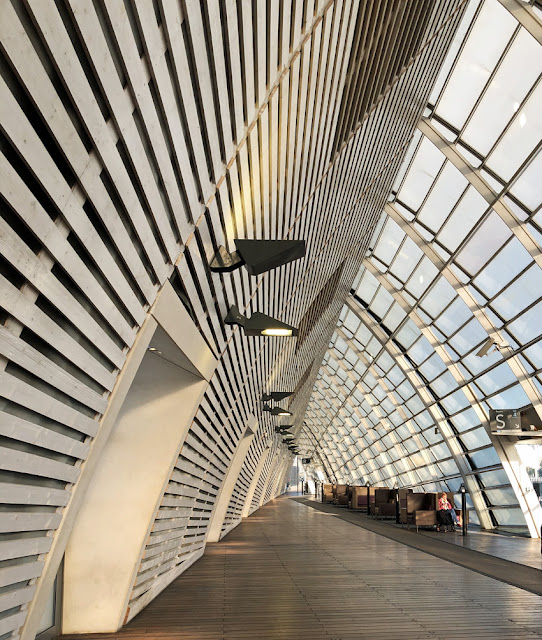 It might have been so easy. Perhaps I was dazzled by the "pomo architecture", which was impressive, above showing the walkway up to my platform, below looking back along the interior of the station, 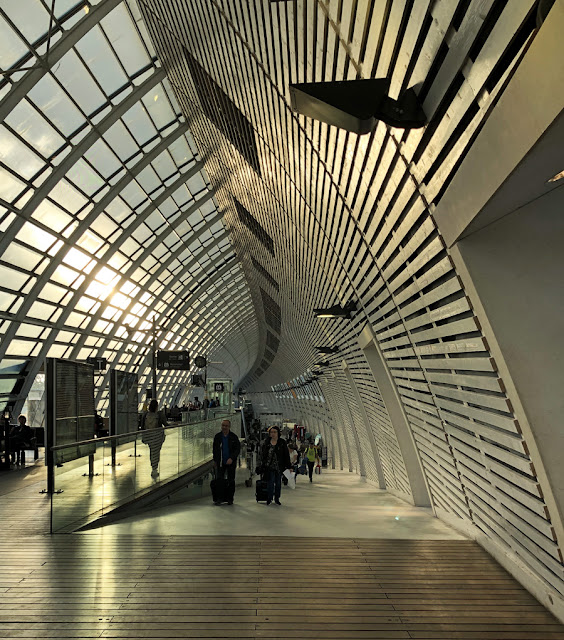 perhaps I was just tired after a long trip and not wide enough awake for my early journey. However, I found the correct platform, moved into the exact position to step up into my car. I was all set. The train arrived, a bit early I thought for a second or two, but then thought nothing else of it. I found my reserved seat, sat, and relaxed. But when the train pulled out a good five minutes before the scheduled departure, I grew concerned. Then, looking out one of the windows I noticed the position of the sun, and realized I was headed east, not west. Indeed, I was on a train not to Frankfurt, but to...Madrid! The same car number, the same seat, but going the wrong way!

I will say that the information on the track (shown below) was not easily available, and that was certainly a contributing factor, but still... 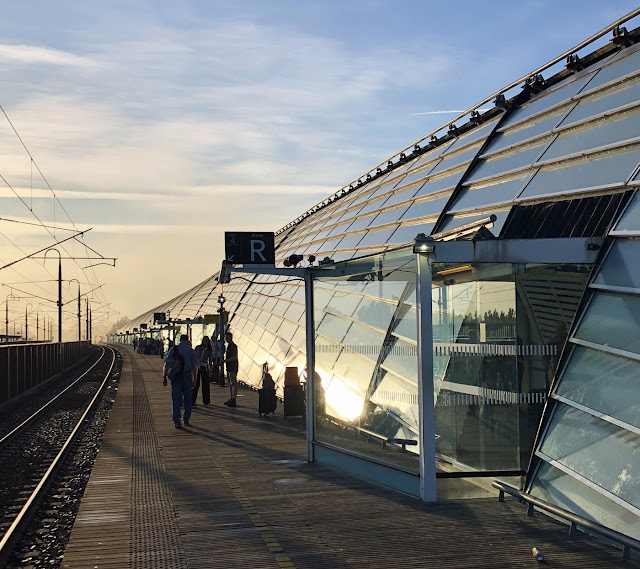 The first stop on the train was very close, fortunately, at Nimes, which I'd visited on a day tour, just two days earlier. I grabbed my luggage, got off the train and raced into the station, where two or three very helpful if somewhat startled employees found me a train going in the right direction, not direct, but with a change in Paris. Whew! This meant transferring not just from train to train but from the Gare de Lyon to the Gare de l' Este. I had plenty of time, grabbed a taxi with a very friendly driver (not always the case in Paris) who got me there with nearly two hours to spare. 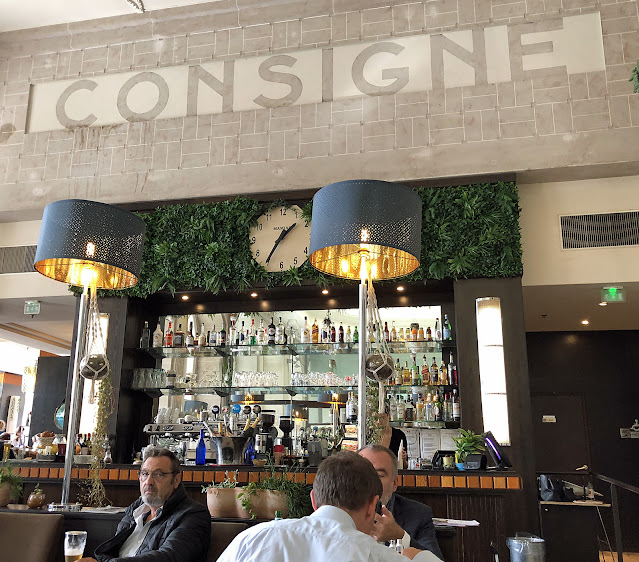 So I sat down in a nicer than usual restaurant within the station and had a lovely, relaxed lunch, shown just below, a substantial chicken Caesar and a very tasty glass of wine. 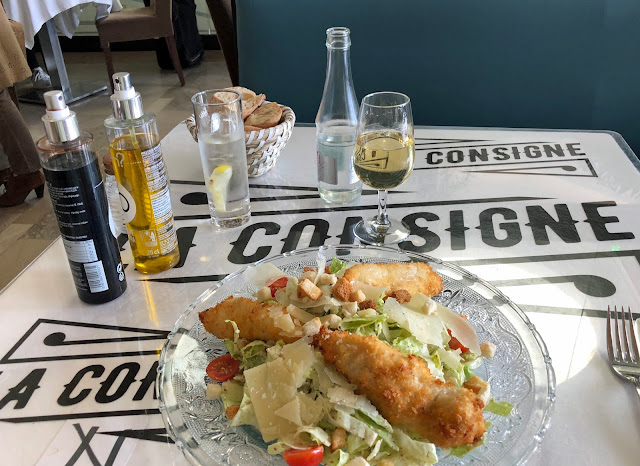 I left the restaurant, and looked contentedly to see what platform from which my train would leave. But there didn't seem to be a time listed. Oh dear. So I took myself to the ticket office and they told me, "Oh, that train has been cancelled." Sacre bleu! The first alternative was the following train in the same direction, but alas that was full. Fortunately I was far from the only person involved, so hours later a special train pulled into the station. No reserved seat, no first class, but there was room for everyone.

So on I boarded the train, which was headed to Strasbourg - right direction at least - arriving at 6:41 pm. Once there we passengers had to rush across several tracks to a tiny 3-car shuttle that, stuffed to the gills with all of us that had been on the "special" from Paris, took us just across the river to Offenburg, in Germany. We hopped on a waiting train there that took us, via Karlsruhe and Mannheim, to Frankfurt AT LONG LAST! It was 9:08 pm, hours and hours later than I'd planned.

But! My travel troubles were still not quite over. I have flown into and out of Frankfurt a few times, but I don't always book the same hotel. For this trip I had booked one very close to the station, but in the pitch dark I had no idea how to get there. I went to the taxi stand, but the first driver in line refused to take me. The hotel was too close, he was waiting for a more lucrative fare. There was a second taxi, so I tried that one (there was no one else even waiting for a cab!) and that driver seemed willing until the first driver had some words with him. Neither would take me. So I set off in search of the hotel, cursing drivers, taxis and Frankfurt in general, when I spotted a cab empty of passengers driving down the road, and waved him down. He was the friendliest fellow in the world. After explaining my dilemma to him he shook his head regarding the other drivers, and said, "At this time of night you would never have found your hotel." He got me there in minutes. I paid him the fare, and the same amount again for the tip, which he richly deserved.

After that long, wretched travel day, I checked in, and once in my room (the photo below, and under that the view from the window) fell almost immediately into a deep, deep sleep. 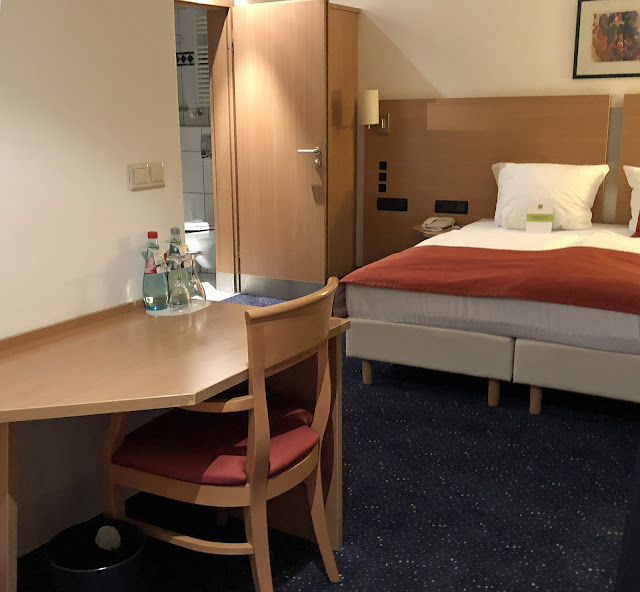 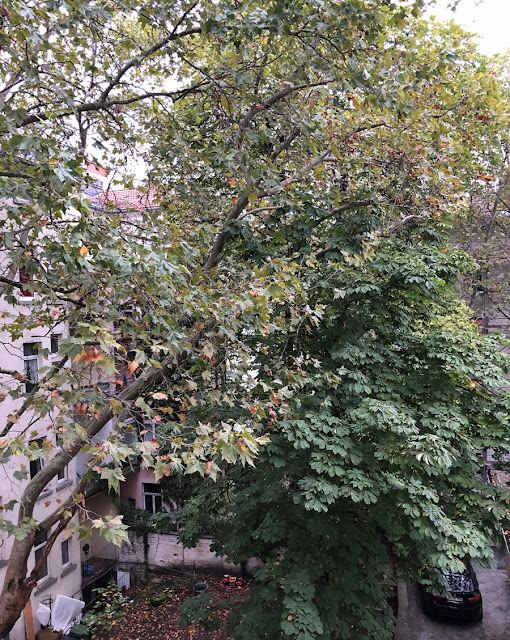 The next day was mine to do as I liked in Frankfurt. I did a casual bit of exploring. I had on an earlier trip seen the tiny old town, the Goethe house and the cathedral. So I started with a nice long stroll on the wide tree-lined path next to the River Main 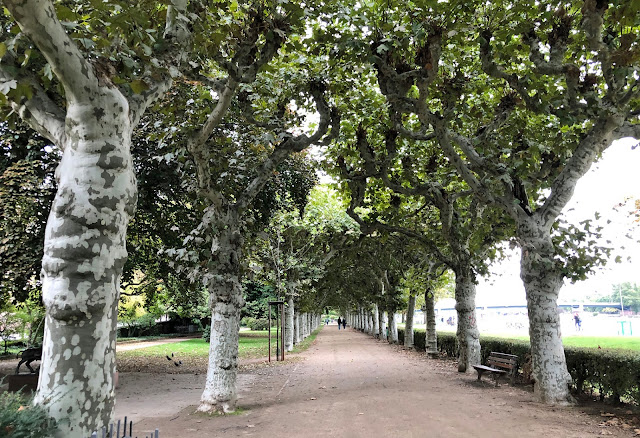 then crossed the river on a footbridge 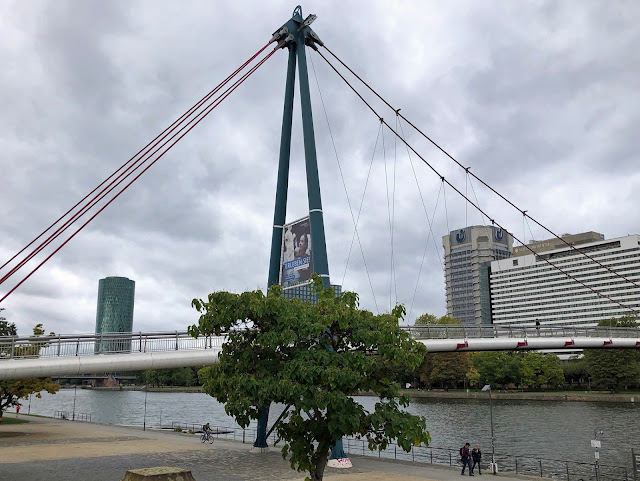 and spent a good bit of my day at The Städel, hardly the Louvre, but a very good art museum.

The collection ranged from old masters to relatively recent work. I photographed several of my favorites, among them a beautiful Botticelli. I'm a sucker for his gorgeous women! 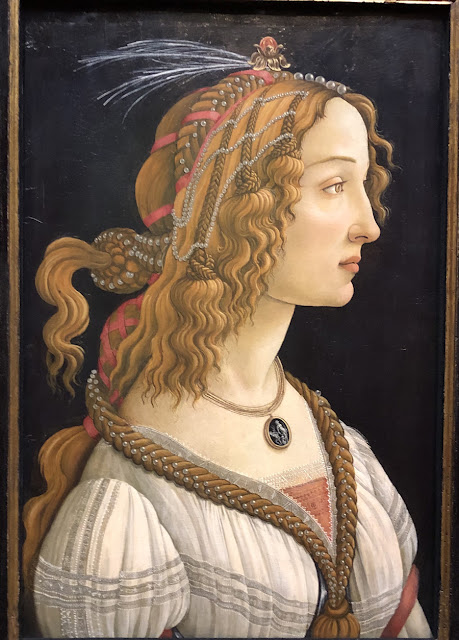 I found a late 18th century painting by Tischbein that I used when teaching my theatre history class, of Goethe relaxing on his travels through Italy. 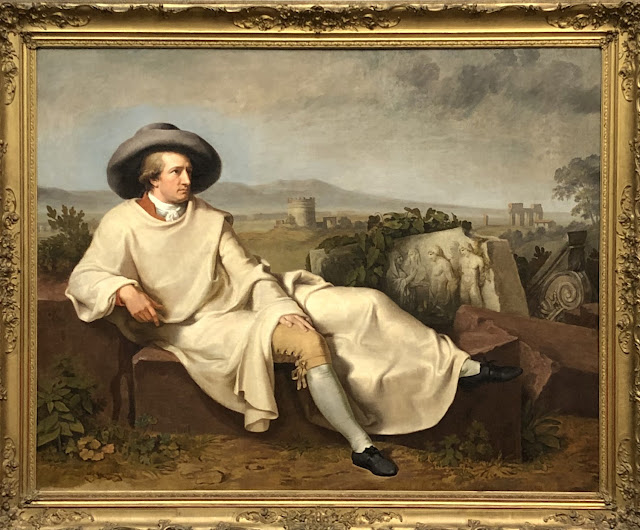 Courbet was represented by a bucolic landscape of Frankfurt itself - very little of that "in the country" style remains today. 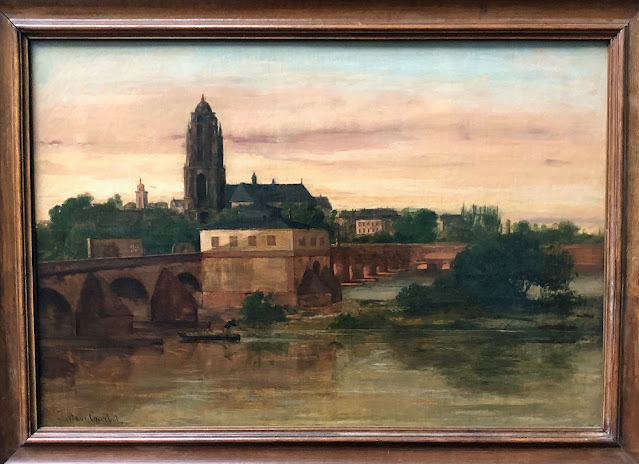 But I found myself most enjoying the works of late 19th-early 20th century modernists. I got a kick out of a Max Ernst sculpture called "Lunar Asparagus" 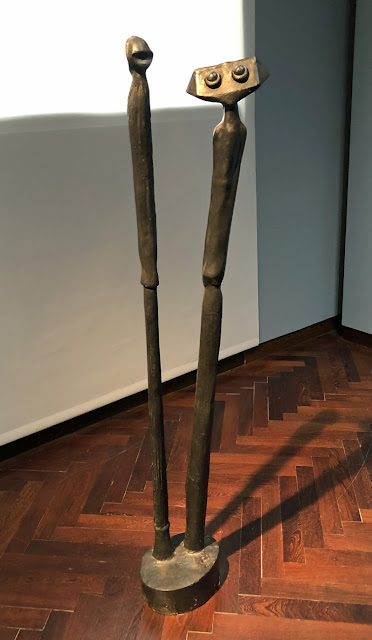 I loved the darkness (he's not often "light" is he?) of Munch's "Jealousy" 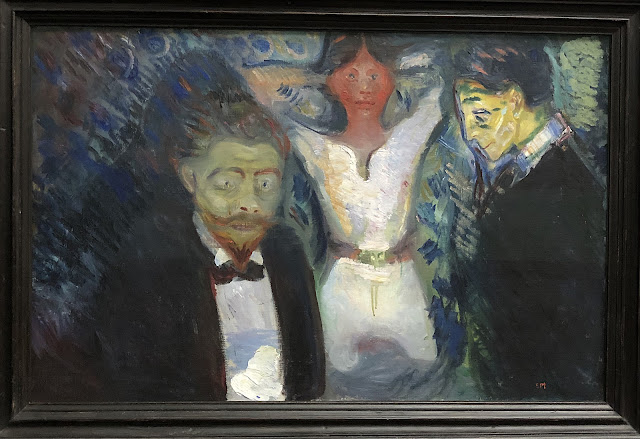 Max Beckman amused me with his "Still Life with Saxophones

That's enough examples for now, but I hope will give you a taste, not just of the museum collection, but of my taste!

While still across the river, I photographed the skyline opposite. In case you doubt my statement that there's not much bucolic about today's Frankfurt, here's a bit of it 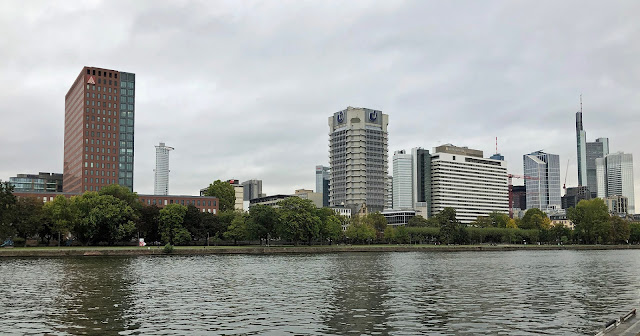 It remained a rather pleasant if very cloudy day, so I crossed back over the river and strolled leisurely along a major thoroughfare whose name changes every few blocks, next to which several Frankfurt highlights can be seen. The well-designed logo with the Euro in blue and stars of gold surrounding it indicates the location of the European Central Bank.

Not far from there on the other side of the street is Opera Frankfurt. There is an old opera house in town, but this is the place where highly innovative productions are performed - some have said that many of the stagings are TOO innovative.

Next to the Oper is a rather attractive statue/fountain 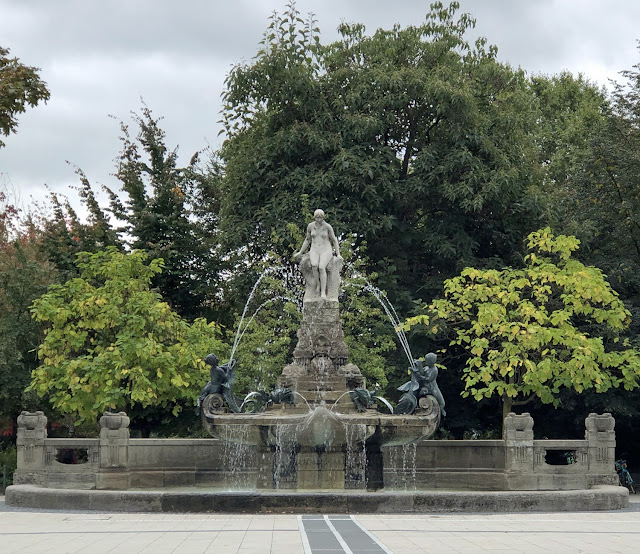 I was headed back in the direction of the Hauptbahnhof, ultimately to return to my hotel, but first to have lunch. I found what I wanted at Kakadu, which features a well-stocked bar 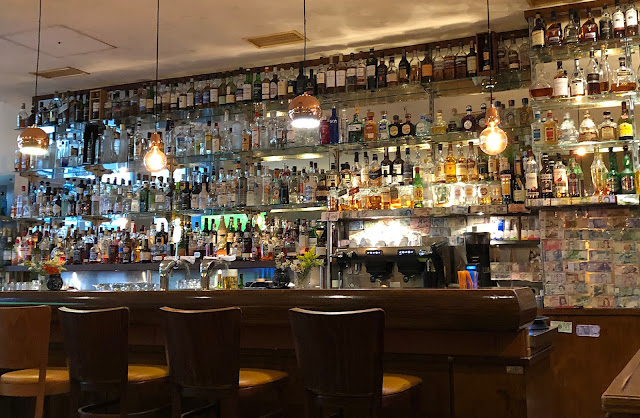 I chose a German...well, Austrian favorite, Wienerschnitzel, and was not disappointed. 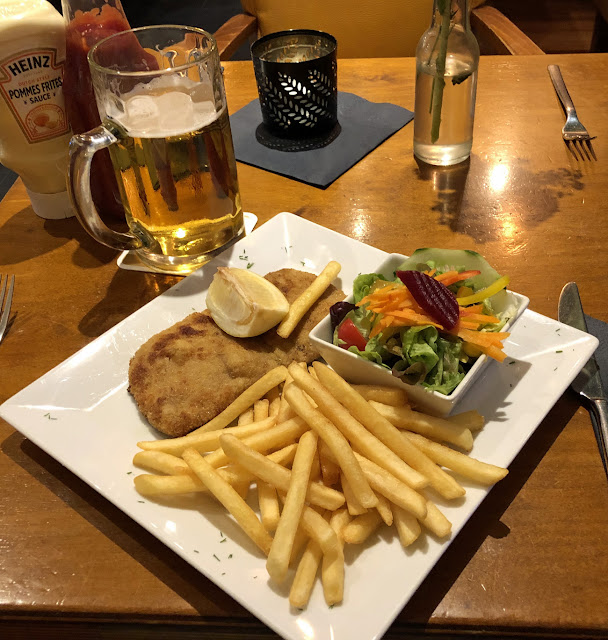 The beer was tasty too - the "king" of beers?

Maybe not, but when in Germany it's hard to go wrong, and König suited me fine.

The closer one gets to the station, the more crowded, both with people and with eateries, the area becomes. 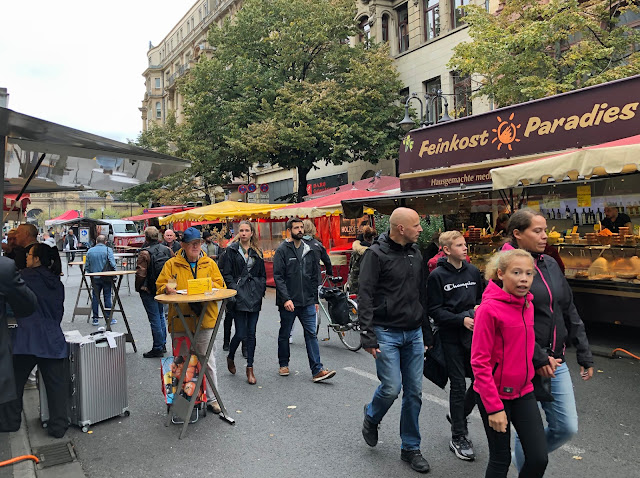 One last photo for you, of the Hauptbahnhof - view it, there is little question that it is haupt. 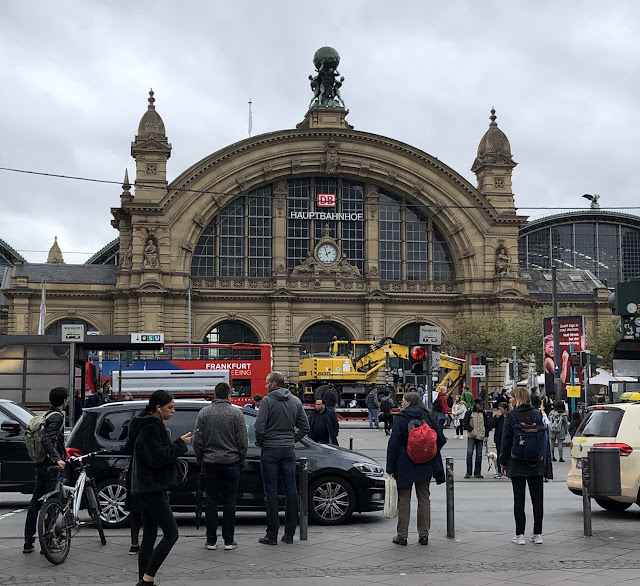 The next morning, very early, I caught a train to the airport, and on a travel day unlike my nightmarish train fiasco, fortune fortuned smiled. Several hours later I was back in the US, and only a few hours later back home. With a few exceptions it had been a wonderful three weeks.

I am writing this account nearly two years later. Thanks - not - to Covid I have not traveled abroad since, but I hope to in a few more months. I have booked a flight to Rome on 24 November, and am very excited, though the closer I get to my departure, and the more the Delta variant continues to plague us, I fear that I might have to cancel still another another trip across the pond. I so hope I will be able to make the trip, and if I do then shortly after you'll hear from me...if not then sometime in spring of 2022 - if the gods of plagues and travels allow. After all, la vita e troppo breve per Dottore Gianni...ciao a tutti!